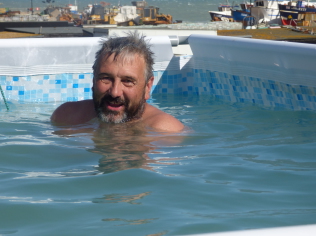 So, on Wednesday evening (14th August) we unpacked the pool, put it together and sited it on the balcony at East Hastings Sea Angling Association (EHSAA). The ladder presented more of a challenge than the pool but after about three hours it was completed and we went home to make the last minute preparations.

Thursday morning dawned rather breezy but we were all excited and full of anticipation. ESFRS were due to fill the pool around midday enabling us to heat the water before the start. Due to operational requirements they were a bit late arriving but worse was to come. Having put in about six inches of water we noticed three leaks close to the ground on one side of the pool. On close inspection it appeared that the material had ‘cracked’ and ‘split’. We couldn’t believe it – a brand new pool! We took photos ready to send to the supplier after the event and two members went in opposite directions to buy waterproof sealant, waterproof tape and pool patches. In the meantime ESFRS pumped the water out and we dried the pool inside to take the patches. Once completed ESFRS returned and filled the pool again. They were still filling it as Dean started at 4pm. This meant that we hadn’t been able to heat the pool at all, the water was very cold, straight from a hydrant.

All went well to begin with but with such cold water it was always going to be so much harder for Dean. In the early hours we were still struggling to get the water warm enough, Dean was feeling the cold and couldn’t raise his body temperature whilst in the pool. At 4am on Friday, 12 hours into the swim, Dean made a very difficult decision to take some time out as he was well towards serious hypothermia. The club, with Dean, needed to decide what to do. So many people had put in so much time and effort into the swim that we agreed that we couldn’t abandon it. Other club members came forward and offered to swim so it was decided that we’d continue as a relay and that Dean would continue once rewarmed.

The response was absolutely amazing. Members who’d offered to come and support the swim as part of the safety team rota were now offering to swim for us. Members present and past saw our posts on facebook and were keen to help.

The support was so motivating that despite 50 mph gusts of wind over Friday night, when we were worried that we’d lose our gazebos, we kept going. Some members hardly went home, they became cold and very tired but they were motivated by the support.

Overall, we feel that the club was able to turn the whole event around. We think we probably reached more people because there were more swimmers taking part. We felt that despite a leaking pool, cold water, wind and rain we could continue. By Saturday we’d had 30,000 views on facebook.

EHSAA were so supportive before, during and after the swim that special thanks must go to Paul Carter (Chair) who started the swim and all there. We’d like to thank the Mayor for coming along when we finished at 4pm on Sunday and for also drawing the raffle. We’d like to thank all who contributed towards the raffle. During the 72 hours we raised £998 and we know some donations have been made through our website too. A huge thank you to everyone who swum, provided safety cover, visited us and ESFRA for filling the pool and emptying it on Sunday.

You can still donate by clicking here.

Photos of the Training:

Photos of the Set Up:

Photos of the Swim: