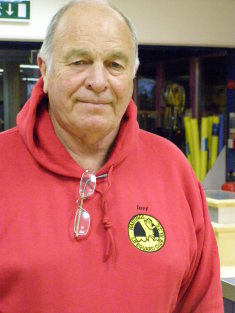 It is almost a year since we said a very sad ‘goodbye’ to Terry Fitzgerald who had been a member and trainer of Hastings & St.Leonards Voluntary Lifeguard Club for over 30 years.

Terry was well known and respected in the Lifesaving and Lifeguard world throughout the South East and receiving recognition and awards for his dedication and hard work across The Royal Lifesaving Society. This encouraged his continuation to support the society and clubs he was a part of.

Terry had an amazing gift of engaging with and inspiring our Rookie members (8 years to 12 years old) who were only too happy to carry his bags for him as he went onto poolside with his walking sticks where he passed on his knowledge and passion for Lifesaving.

Terry’s family marked his love of Lifesaving by asking for donations in his memory to Hastings & St.Leonards Voluntary Lifeguard Club. £1500 was raised in Terry’s memory and the Club would like to thank everyone who donated. Every pound raised will be used towards the Club with emphasis on the younger members.

It seems appropriate, as a year approaches, to let those who donated know what we have done to date. When we returned after the Coronavirus pandemic some of our trainers drafted four Club Lifesaving awards that are ‘COVID safe’. These are now supported by badges and certificates which members are able to work towards, and when completed, purchase at subsidised rates.

During the summer we offered open water sessions at no cost where the younger members transferred their pool skills to open water and also started learning some boat handing skills.

2022 is our 50th Anniversary and we are planning an open water event in Terry’s memory.

I’m afraid we have had some very sad news. Following a short period of illness Terry passed away in the early hours of Monday 7th December 2020.
Terry has been an active member of our Club for over 30 years. Recently Terry has been inspiring the next generation of lifesavers by teaching the Rookie and Survive and Save group. Terry always had a ‘story’ and ‘words of wisdom’ for them keeping them focused on the task in hand. Being an experienced swimming teacher too he would improve their swimming strokes often without them realising. It is a testimony to him that before coronavirus prevented us meeting the group had increased in size and these young people kept coming back.
Terry also used to help to train and assess beach lifeguards, open water awards and encourage participation in competitions. Terry was a lifesaving competitor himself but also committed time to our committee as a member, chair and president.
He shared all his knowledge, experience and skills to gift people with life skills. We know some have used these skills to help others.
RIP Terry – you won’t be forgotten.