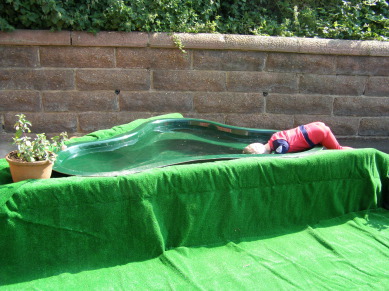 Safety in Action was originally co-ordinated by Bexhill and Rother Primary Care Trust and started some 18 years ago for the benefit of children in the Hastings and Rother areas who are under the age of 11.

Children ‘work’ in teams looking at ‘everyday’ scenarios which could be potential threatening or dangerous to them. Organisations taking part include Police, Fire and Rescue Service, Ambulance Service, Maritime Coastguard Agency, Health and Safety Executive, South Eastern Trains, Electricity Company and ourselves. Each organisation sets an everyday scenario for the children to ‘deal with’.

Originally the event was held at Pestalozzi Village at Sedlescombe where we were able to utilise their pond to present a situation where there was a small boat with a couple in it and they had lost their paddle. This enabled us to incorporate a lot of water safety into the scenario and the teams’ subsequent actions.

The teams are all asked the same questions and marked on a point system. Over the years we have been impressed with the teams’ sensible approach to the problem, always staying in at least pairs and going for help whilst others try to keep those in the boat calm.

In 2008 the organisation of the event was taken over by East Sussex Fire and Rescue Service and is now held at Hastings Community Fire Station, Bohemia Road, Hastings. The event now aims at a total of 750 children over the 5 days.

When Safety in Action relocated to The Fire Station we needed to rethink our scenario as there is no pond there!! We now have a garden pond with a small child fallen in (a manikin). The parent had been called away to answer the phone. When the team arrives the HLG member will say: “There is a child fallen into the pond. What can we do to help?”

The 10 minutes allocated to each team covers what to do with the child and getting help. They then talk about seaside flags, seaside safety and finally ‘have a go’ at rescuing someone by throwing a rope.

The feedback and evaluations are very positive and the children really enjoy their challenges.

Hastings and St.Leonards Voluntary Lifeguards have been involved since the event started. We are proud to say that we are the only Voluntary organisation that takes part – all the other contributing organisations are professionally paid companies. We are pleased to participate but reliant on our volunteers to be able to give their time.